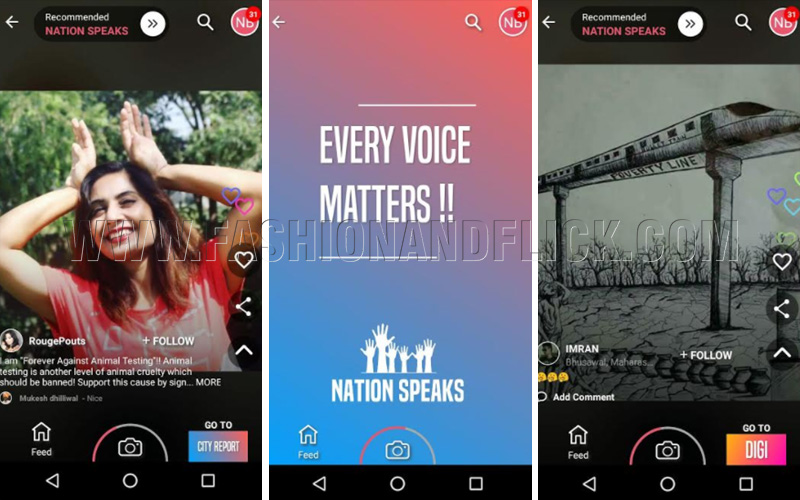 New Delhi, October 4, 2017: A strong sense of what its users want has always been the core differentiator of Roposo – India’s first ‘TV by the People’. Taking this proposition further with the objective of giving a voice to the youth, it has now rolled out its new channel – Nation Speaks. Launched on October 2, 2017, the channel aims to present its users an opportunity to express themselves on problems which affect them on a day-to-day basis. Positioned as an open space for young users to voice their strong opinions, the channel also invites them to share and discuss possible solutions for the problems that affect our generation the most.

Mahatma Gandhi got our nation its independence by standing up against the British and expressing his ideals, while connecting to a nationwide audience. With that thought, the team decided that October 2 was the perfect date to launch Nation Speaks. This channel encourages users to stand up and express their views – give words to the opinions that echo in the world’s largest democracy. Speaking about the idea behind the channel, Mayank Bhangadia, CEO and Co-Founder at Roposo, said, “Giving our users a vibrant space, free of restrictions and judgment, to voice their opinions, was therefore the natural progression in our growth journey as India’s ‘TV by the People’. We envision Nation Speaks as a completely novel concept that will further enhance Roposo’s position as a platform that Indian millennials relate to.”

While Roposo has been receiving a phenomenal response to its unique proposition as ‘TV by the People’, initiatives such as this will broaden the scope of experiences that users share on the platform. From personal stories and video travelogues to quirky photos, Roposo has been the platform of choice for Indian millennials to interact with other like-minded audiences. With the launch of Nation Speaks, more youngsters who feel strongly about things beyond their personal perimeter will now be encouraged to join the digital destination and add to the confluence of thoughts, expressions, ideas and emotions.

GRAZIA : 100 Most Influential In Fashion