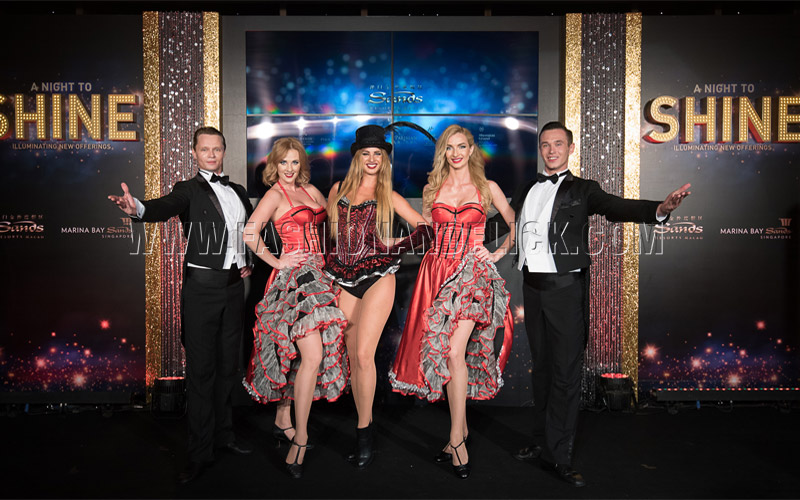 With seven distinctive hotel brands, more than 150,000 square metres of versatile meeting and event space, great dining and top international entertainment, all linked by bridges and under one roof, Sands Resorts Macao is the most comprehensive destination in Asia-Pacific.

Throughout the event, guests learnt about Sands Resorts Macao’s “Illuminating New Offerings”, and entertainment options, while at the same time were given their own opportunity to be in the spotlight. With a VIP ultimate access party vibe and personalised gifts, “A Night to Shine” offered the chance to experience what it is to be a star. Entertainment included musical medleys from Sands Resorts Macao’s talented in-house Streetmosphere artists.

With the opening of The Parisian Macao last year, the company’s vision for Sands Resorts Macao was completed. Inspired by the famed ‘City of Light’, The Parisian Macao offers a full array of integrated facilities including approximately 3,000 guestrooms and suites, many with spectacular views of the Eiffel Tower.

The Venetian Macao’s suites are undergoing renovation in a fresh, contemporary style, while also to be unveiled is the new outdoor event lawn, IL Prato, designed to host up to 5,000 people for cocktail style functions. Meanwhile a new French outdoor space, Le Jardin, directly opposite The Parisian Macao with a spectacular view of the Eiffel Tower, will also be launched, offering a great new addition for MICE customers seeking a unique outdoor experience.

Sands Resorts Macao has launched a Diwali package allowing guests to tailor-make a dream break at one of four award-winning hotels, including The Venetian Macao; The Parisian Macao; Conrad Macao, Cotai Central; or Holiday Inn Macao Cotai Central. The offer includes an array of great entertainment including the spectacular China Show – Monkey King and THRILLER LIVE, alongside wonderful dining and retail opportunities. The Diwali package is available for stays between Sept. 15 and Nov. 30, 2017.

With some of the most versatile and attractive meetings and exhibition facilities available, Sands Resorts Macao recently launched the Smart Meetings at Sands Resorts Macao offer, giving conference organisers, event planners and delegates a range of attractive benefits, including 5% off master bills, complimentary rooms and upgrades, and major discounts on equipment rentals, ferry tickets and entertainment.

The spectacular China Show – Monkey King by Beijing Hua Yan Group has arrived at the new 1,700-seat Sands Cotai Theatre at Sands Cotai Central. The large-scale fantasy stage play is based on the epic Tang Dynasty story of the famous monk Xuan Zang, better known as “A Journey to the West”, and regarded as one of the great Chinese legends. The show combines dance, acrobatics, drama, martial arts, magic, 3D effects, LED projections, video mapping and full surround sound, together with creative lighting, choreography, music and spectacular costumes.

Back to The Parisian Macao by popular demand from now until Sept. 3, 2017 is the sensational stage show THRILLER LIVE, a huge success when launched as the debut act at The Parisian Theatre. Coming directly from London’s West End, THRILLER LIVE features the global hits and dance moves of music legend Michael Jackson.

Guests can savour the finest selection of authentic Indian cuisine at Michelin starred
The Golden Peacock at The Venetian Macao. All dishes are made from scratch using ingredients imported directly from India. The cuisine covers a comprehensive range of regional specialties and is prepared by a team of chefs from throughout India, led by Kerala-native Chef Justin Paul.