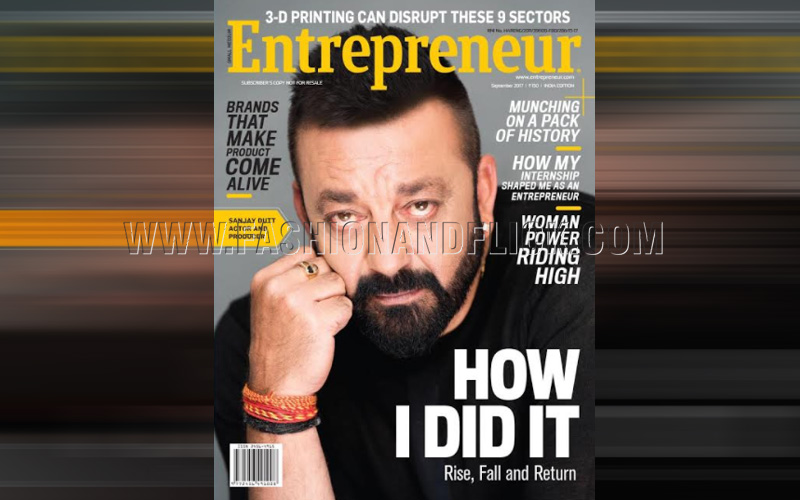 September 7, 2017, New Delhi: Bollywood superstar Sanjay Dutt is on the cover of Entrepreneur India to talk about his renewed faith in God, the ups and downs in his life and his comeback to movies.

As a monthly publication, Entrepreneur magazine has captured the soul of Indian enterprise owner’s right from blue-chip companies to family-owned businesses, from small and medium enterprises to start-ups.Celebrities like Shah Rukh Khan, Hrithik Roshan and Anushka Sharma are featured in the previous editions from the world of entertainment on the cover of this magazine.

This is Dutt’s first magazine cover after a sabbatical of four years. In the September issue of Entrepreneur India, Dutt talks about “How I Did It, Rise, Fall and Return” – sharing his ups and downs and how he’s making a comeback in the industry.

Talking about his life in jail, in the Entrepreneur cover story interview, Sanjay Dutt said, “In jail I realized that I had to be there for a certain amount of time and there is nothing I could do, so let’s make the most of it. Instead of being regressive, let’s move forward and make it positive. I have deep faith in God, so I read the Shivpuran and Ganeshpuran, Mahabharata, Ramanyana and Gita.”

Speaking on the special issue Ritu Marya, Editor-in-Chief, Entrepreneur India says, “In the September 2017 Special issue, we have brought forward such entrepreneurs who have shown extraordinary power of resilience and have emerged as real heroes. One name who has time and again proven that – if life puts you down then Sanjay Dutt bounces right back. He is not the one who paused to take stock and introspect at the situation rather he took charge and marched ahead to create his own new path.”

Dutt is known for his macho man image and has given several major blockbusters hits including MunnaBhai MBBS, Lage Raho Munnabhai, Vaastav and Khalnayak.

Sanjay Dutt is gearing up for a comeback with Bhoomi that stars Aditi Rao Hydari as his daughter. The film is being directed by Mr. Omung Kumar who also directed Mary Kom.

In a film career spanning more than 35 years, four of his films have won various National Film Awards.

To catch all the behind the scene action, check below

Rheson By Rhea And Sonam Kapoor Is Now Available On Amazon.In