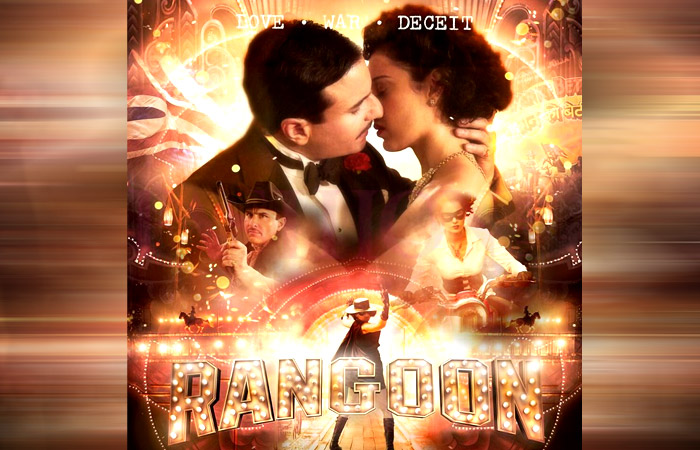 Shahid Kapoor in the military outfit, Kangana Ranaut displaying her charm and Saif Ali Khan spreading the right oomph of royalty, are adorable to watch. The actors in Rangoon are remarkable performers. Their performances convey a sense of loyalty for each other.

Right from its cast, music, dialogues to the best thing it has – it’s narration, the film is a huge collection of moments. Moments that are perfectly projected.

The love triangle between Saif Ali Khan as Rustom “Rusi” Billimoria; Shahid Kapoor as Jamadar Nawab Malik; Kangana Ranaut as Miss Julia is the heart of the movie.

The bubblystar Julia is torn between obligation and chemistry. She was once ready for losing her identity to her lover Russi but is brave enough to admit love to the soldier Nawab Malik.

Russi despite his unswerving love for Julia finds himself under control by the British rule and revels the powers and the lifestyle that comes along. Malik is crushed between love and his duty.

As Vishal Bhardwaj in his most films, betrayal, broken promises and defied emotions do not leave the plot of Rangoon as well. The idea of being helpless in love is something that the director seems to have carved in a better way in the film as compared to his previous directorial.