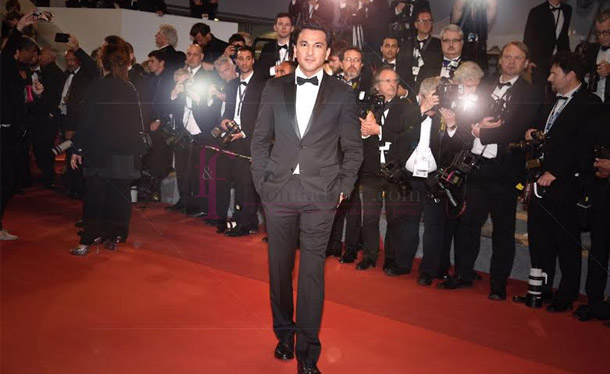 CANNES, May 14, 2016: Indian born, the Michelin-starred chef with many ‘firsts’ walked the red carpet and made an appearance at the prestigious Cannes Film Festival again with a documentary called ‘Kitchens of Gratitude’. The documentary captures Chef’s belief that food has always been the thread that brings people together and that transcends all barriers of caste, creed, faith and encourages people to share.

was unveiled by His Excellency

r to France along with Sr Director Leena

Jaisani, Media and Entertainment, FICCI at

the India Pavilion on the French Riviera on

documentary was held thereafter at the 69th

“Michelin starred Chef Vikas Khanna is not just a Culinary Ambassador of India but is also helping create awareness of our culture globally. For Indians, food is a sacred expression of sharing and caring and with Kitchens of Gratitude, he has personified it. This is a small step but will go a long way in building bridges amongst communities and nations”, said Honorable Ambassador Dr Mohan Kumar.

While researching on how food was cooked in the Harappa Civilization, Chef Vikas Khanna discovered that daily cooking was a communal activity in those times and he did not find a single reference to the use of small cooking pots, which bears out to this finding. The fact that everyone used to get together for cooking and eating asserts his belief, “Unifying power of food was stronger even before religion came into being.” Taking this forward Chef has created, directed and shot a 15 minute documentary which captures this belief. The documentary feature personalities like Dalai Lama, Deepak Chopra, Mata Amritanandmayi (spiritual leader) and Pastor Craig Mayes of the New York Mission, among others.

Said Chef Khanna, “Kitchens of Gratitude for me is solely about how food has always been the thread that brings people together encourage people to share. The documentary examines how shared food experiences help break the walls that divide people. I firmly believe that our children must know that every faith welcomes everyone. No faith ever promotes discrimination. It is food that binds us together, and it must continue that way,”