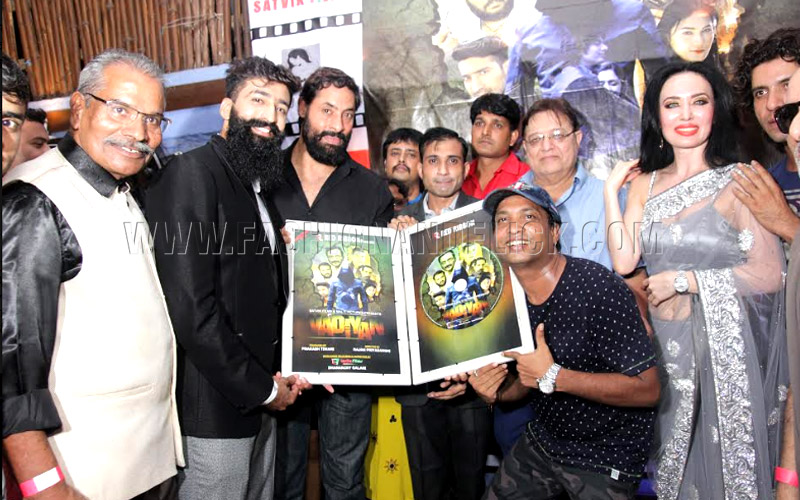 July 22, 2017 Mumbai: The music and trailer launch of Bollywood movie Vadiyan happened at Mumbai with great pomp and fanfare. Present at the event were the cast, crew and guests including Rajpal Yadav, Milind Gunaji, Ranjeet, Sanjay Mishra, Milind Gunaji, Rakesh Bedi, Anil Nagrath and Sunil Pal. Tarannum Malik, who has given hits like Saiyaara from Ek Tha Tiger, Jao Na from Whats Your Rashee, etc. enthralled the audiences with her electrifying performance. The film – a suspense thriller produced by Satvik Films and Malti Pictures is all set to enthrall the audiences this September.

Directed by Rajan Priyadarshi and produced by Prakash Tiwari, the film revolves around the characters portrayed by Milind Gunaji and Sudesh Berry and is a story based on mistaken identity and identity theft; which is much prevalent these days. It boasts of an ensemble cast of Milind Gunaji, Sudesh Berry, Hari Om Kalra, Pritam Jundare, Santosh Anamay, Manish Sharma,Neha Singh, Yashu Dhiman, Anita Tambole, Rajkumar Sahi. The story will tickle the audience as well as intrigue them.

Tarannum Malik has lent her voice to a peppy item number titled ‘Deewane’. The music of the film which comprises of 4 tracks has been taken over by Red Ribbon Music. The other singers are Aniket Arondkar, Sandy D’souza and Abhijeet Arun. The music is composed by Ilyas G., Badal Khan & Abhijeet Arun. Lyrics are by Amol Arondkar and Dipak Deshmukh.

Commenting on the occasion Director Rajan Priyadarshi said, ”This is my first film as a director, and am really happy the way it has turned out. I believe in making movies which are entertaining and can be watched by the entire family together. I strongly believe that Hindi cinema has more scope than any other language cinema in the country.

Producer Prakash Tiwari commenting on the occasion said, “We have done a lot of hardwork to showcase the story beautifully in a way that the audiences relate to the film. Every member of the cast and crew worked equally hard to bring this project to light.” Producer & Distributor,  Dhananjay Galani of Lavlin films who’s marketing and distributing the film said, “The run time of the movie is 2 hrs and 15 mins; and we plan to release it in September. The movie touches subjects which are the topic of discussion of today’s youth. I am sure that audiences will love it.”