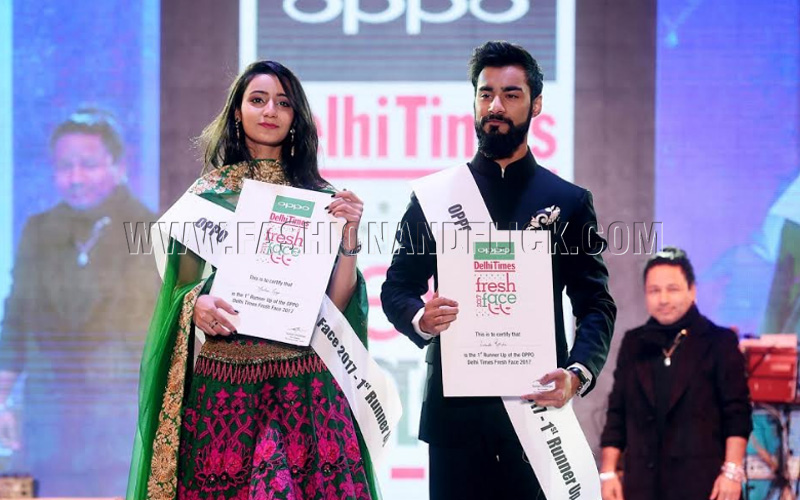 Delhi, 18th December 2017: Delhi Times, the city supplement of TOI, in collaboration with OPPO brings the 10th edition of the most coveted personality and talent hunt across colleges in India, OPPO Times Fresh Face 2017. India’s largest inter-college talent hunt contest is held across 11 cities and numerous colleges; they recently concluded rounds in Delhi, where Viren Tak & Seemran Pookulangara won the city finale round.

Viren’s dance performance on medley of contemporary songs won the judges over while Seemran’s stupendous dancing moves had the judges and audience in awe of her talent. Contestants were judged based on their talents, the way they carry themselves, their opinions on current affairs, etc. by the esteemed panel of judges including singer-musician Kailash Kher and actor Karan Vohra.

The Delhi finale also witnessed up-tempo performances by the musician duo Meet Bros. The sensational artists got the audience dancing to their tunes with their chartbusting numbers including Baby Doll and Chittiyaan Kalaiyaan.

Speaking about the talented lot at the city finale round, musician and singer Kailash Kher, said, “I congratulate the winners of OPPO Times Fresh Face. Delhi is full of talent and platforms like these bring the real talent in realms of fashion, music, dance, entertainment at the fore front. The talent from Delhi rules the film industry be it singers, actors, music composers, who so ever goes from here turns out to be a superstar. ”

Adding to that actor Karan Vohra said, “I am very happy to be a part of OPPO Times Fresh Face and congratulate the winners. It’s a unique initiative by Delhi Times as it gives a platform and a push to young talent to showcase their caliber.”

Meet Bros duo said, “OPPO Times Fresh Face is a great initiative as it gives exposure to the youngsters and help them with right direction to enhance their talent. These kinds of platforms bring forward the real and passionate youngsters and give them the confidence that they carry with them in their lives. There weren’t too many such platforms when we were young and we are happy that Times Group has come forward and this is becoming such a big thing all over the country.”

City winners will compete nationally at the Grand Finale, which will be hosted in Mumbai. The two national winners will be awarded an OPPO F5 Capture the real you phone and an international trip.

OPPO Times Fresh Face has become an expansive talent-pool where each year students have showcased some exceptional skills while following the theme of this edition – What is your Fresh Factor?

Talk to us about the contest on our Facebook Page – HYPERLINK “https://www.facebook.com/TimesFreshFace/?ref=br_rs&sw_fnr_id=1356163586&fnr_t=0″ TimesFreshFace