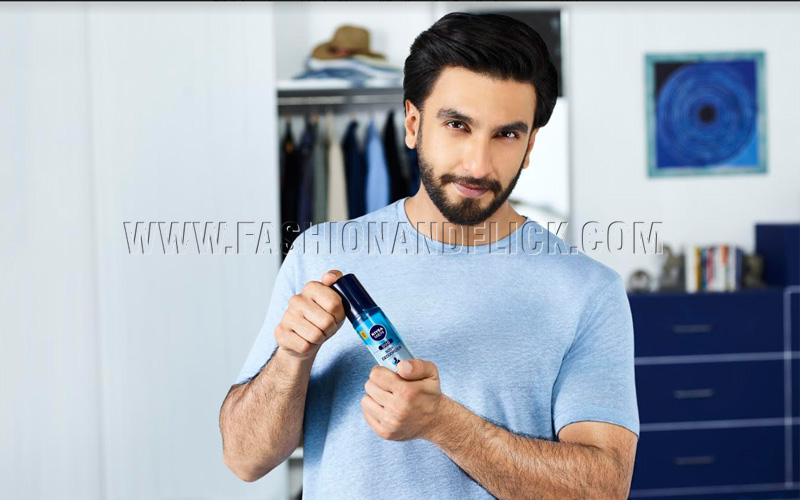 Mumbai, August 23, 2018: NIVEA, World’s No 1 skincare brand and a leading brand in men’s skincare in India, recently announced its new face for NIVEA MEN – Ranveer Singh, emerging India’s most loved Bollywood actor. The first in a series of the brand’s multi-media campaign is the TVC followed by 4 digital films featuring Ranveer talking about the unique dual-phase deodorant – NIVEA MEN DUO. Created and conceptualised by FCB Interface, the campaign goes live today and aims to showcase interesting facets of Ranveer Singh of being an inspiring buddy, caring, confident and of course his un-missable dynamism and sense of humour.

With this campaign, NIVEA MEN is launching a product that is just as dynamic and cool as Ranveer – The NIVEA MEN Duo. The dual phase of the deodorizer works as instant visual proof of long lasting freshness and daylong odour control. ‘Shake to Activate freshness’ and ‘Freshness Guard Technology’ are symbolised by the two distinct colored liquids in transparent and blue.

Neil George, Managing Director, NIVEA India said, “NIVEA India is addressing needs of young consumers by tapping into the trend of ‘modernity’ and Ranveer is the perfect evangelist for the brand to increase its engagement with young India. Just like him, our innovations are hard-working, modern and care for you.”

Neil added, “We are confident that NIVEA MEN DUO is an innovation that will create a strong disruption in the extremely cluttered deodorants category. The dual-phase of this Body Deodorizer works as instant visual proof of the long-lasting freshness it gives. Its ‘Freshness Guard Technology’ is symbolized by the mixing of the two distinct coloured liquids when you ‘Shake to Activate’ it.”

Robby Mathew, Chief Creative Officer, FCB Interface said, “When the idea is in the product itself, the task then is to show it as it is. And Ranveer, despite his larger than life personality, makes the product the undisputed hero of the film.”

The film opens with NIVEA MEN’s new face Ranveer Singh. He’s on a pristine beach with crystal clear blue waters. As he comes out of the ocean, he talks about how regular deodorants don’t last long. That’s why he uses the New NIVEA MEN DUO. It has a cool, new two-layer format with freshness and freshness guard. As he talks about the product with a cool attitude, people start noticing him on the beach. Meanwhile, Ranveer shakes the bottle to mix the layers together. While he does this more people take notice of him. Oblivious, he continues to describe how NIVEA MEN DUO locks the freshness in place. The moment he sprays the deodorant, people from all across the beach start running towards him. They dive onto him and pile up, making sure he can’t escape- just like his freshness can’t escape with NIVEA MEN DUO.

A set of 4 digital films has been created to take the campaign forward and spread the NIVEA Duo message digitally. The film opens with Ranveer Singh in a bathroom. He is just about to use the new NIVEA MEN Duo but before he uses the product, he has to shake it. That’s where the fun begins. Ranveer invites the audience to help choose a fun way to mix the two liquids together. The viewer has to choose between 4 options – the electric shock, the workout, the belly dance and the mind-power shake. In tune with each option, Ranveer enacts the style to mix the product and engaging the audience. Once done, he sprays the NIVEA MEN Duo and is ready to take on the day.