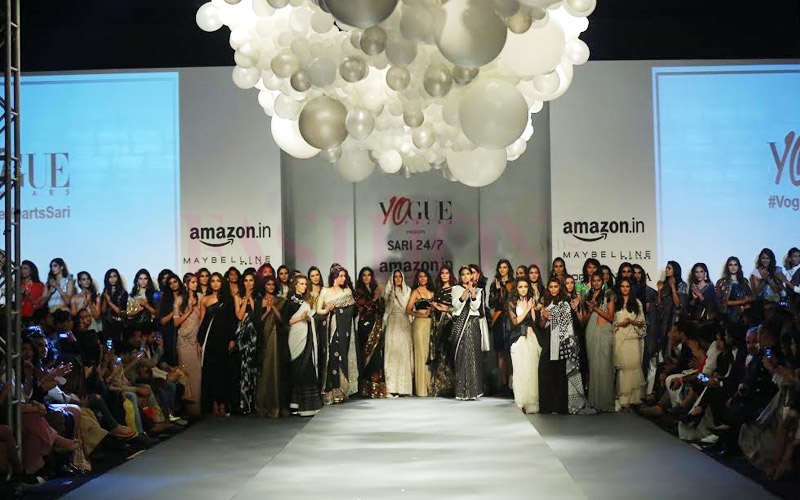 Delhi, 15 March, 2017: India’s fashion bible, Vogue, concluded Day 1 of Amazon India Fashion Week Autumn Winter ’17 by bringing the spotlight on the most ancient Indian costume, the Sari. With almost 60 creations from some of Indian fashion’s most celebrated names, Vogue India’s Sari 24/7 showcased the sari in its full glory, highlighting the diversity of the garment in terms of fabric, handloom weaves and multiple draping techniques. The stunning show, with 5 themes ranging from Blues, Pretty Florals, Tribal, to Gold Embellishments and finishing with Gothic, was each participating designers’ interpretations of the concept of ‘Sari for Day, Sari for Play’.

Vogue India’s Sari 24/7 show at AIFW AW ’17 also marks the beginning of the brand’s celebrations for its 10th anniversary in the Indian Market. With this special initiative, Vogue India launched Vogue Empower 2.0 – The Indian Sari Project, through which the internationally renowned brand encouraged leading Indian designers to showcase their best work on Saris. Over the course of the year, Vogue India aims to popularize the Sari amongst the global fashion community through Vogue’s multiple international editions across 21 countries.

“Vogue India has always celebrated the best of fashion, and for us, that begins with the most symbolic and timeless piece of clothing, the sari,” said Priya Tanna, Editor, Vogue India. “Our intent was matched by the enthusiasm of all the designers who participated in this special show.”

“The ‘Sari 24/7’ show is a project close to my heart, especially because it brought together India’s best designers,” said Anaita Shroff Adajania, Fashion Director, Vogue India. “It’s a milestone event for us, and our way of putting the spotlight on our favourite garment.”

Speaking on the occasion, Sunil Sethi, President, FDCI, said, “As the bible of fashion, Vogue India, celebrates its tenth anniversary, the AIFW runway lit up with a special show. The ‘Vogue Sari 24/7’ brought sari-torial splendour to the stage, with the unmatched elegance of traditional drapes. It was a befitting ending to the ‘Handlooms and Textiles’ homage, on day one.”

From quilted saris, traditional weaves and drapes, party-ready versions, and cool-girl casuals, along with other modern interpretations of the sari where designers used fabrics like jersey crepe to create a more urban, contemporary form of the traditional garment, Vogue’s Sari 24/7 show was every Sari lover’s dream come true! Singer and actress Monica Dogra closed the evening on a definitive high with a melodious rendition of some of her popular hits.

Treading Jewellery In 2017 With Once Upon A Trunk