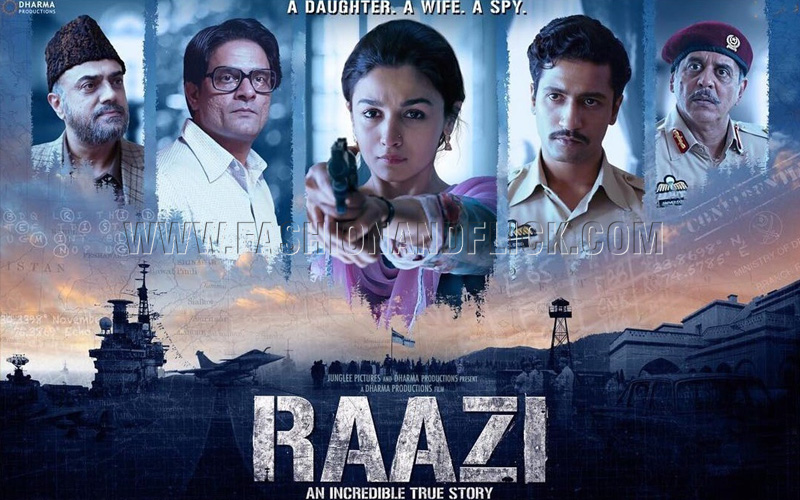 After playing a Bihari migrant in Udta Punjab, Alia Bhatt is set to play the role of a Kashmiri girl in Meghna Gulzar’s espionage thriller Raazi.

The film has Alia who is married to a Pakistani army officer, which will be played by Masaan actor Vicky Kaushal.

The movie is directed by Meghna Gulzar and produced by Junglee Pictures and Dharma Productions and is based on Harinder Sikka’s novel, Calling Sehmat.

Once again Alia is seen shedding her glamorous avatar in ‘Raazi’. The movie starts with Hidayat Khan (Rajit Kapur) who is a hidden spy of Indian in Pakistan but the Pakistan army believes that he is doing work for them. Since he is now diagnosed with a lung tumour and he doesn’t have much time to work for India in the crucial time during 1971 war between Indo-Pak.

Then Hidayat Khan decides to send his daughter Sehmat Khan (Alia Bhat) to Pakistan for spying for India. He plans Sehmat to get married to his friend Pakistan’s Brigadier Syed (Shishir Sharma)’s son Iqbal Syed (Vicky Kaushal) who is himself an army officer. Here is how the journey of a daughter of India Sehmat starts and how she helped India to win from the PNS Ghazi attack.

Vicky Kaushal played the role of Sehmat’s husband and an army officer who is unware of a fact that his wife is an Indian spy who is taking information from his family. His emotions and love for his wife will first time make you love Pakistan’s army officer.

Besides Alia Bhatt and Vicky Kaushal, Jaideep Ahlawat is the power of the film and how he became the centre of attraction in between the brilliant performance of Alia Bhatt.

Other actors like Rajit Kapur, Shishir Sharma, Soni Razdan, Ashwath Bhatt, Soni Razdan, and others have done their work brilliantly.
It has been a while since we heard compositions from the talented trio, Shankar-Ehsaan-Loy. They gave three songs Raazi, Ae Watan, and Dilbaro and all three songs are beautiful, especially these songs will give you the flavour of Kashmiri songs.

Its a great movie to watch. Watching this movie will give you some feel of patriotism and will encourge you to do something for your country.