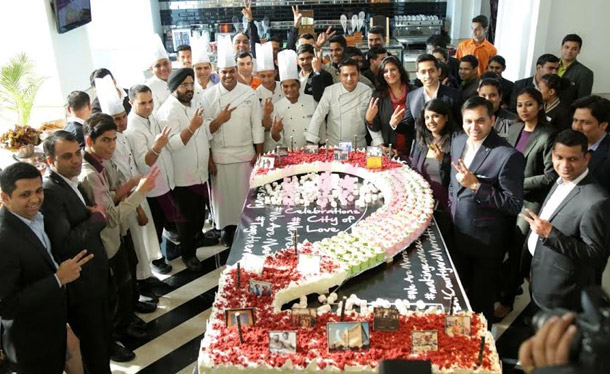 20th January 2017, Agra: Courtyard by Marriott Agra, located in the city of love and the home to world renowned Taj Mahal, is celebrating its 2nd anniversary in the most magnificent way with the longest cake in the history of Agra breaking its own record of last year. To celebrate the journey of two years, the hotel has made the city’s largest cake ever which is 50 ft long and weighs about 100 kgs. This exclusive cake is in the shape of numerical ‘2’ to mark the hotel’s 2nd anniversary in the heritage city.

This cake which would definitely

be remembered for years to come

, has been prepared by the culinary

team at the hotel lead by Executive

Chef, Vivek Kalia.  The guests at the

hotel along with the Marriott Associate

s together had the honor of cutting the

depicting the hotel’s achievements over

Speaking about the celebrations, Mr. Abhishek Sahai, General Manager said, “Over the last two years, Courtyard by Marriott has become a preferred getaway destination offering Indian hospitality with a global flair. We are extremely excited about celebrating the hotel’s second anniversary today. Our team has come up with this unique idea for the occasion. This is the longest cake baked in Agra and it showcases the hotel’s achievements in the last two years! We would like to thank all of you to make our journey a memorable one and we would continue to provide our guests with the best of services which Marriott is known for. We assure our guests that Courtyard Marriott Agra will continue to set new benchmarks in hospitality services and creative events in the city. The third year of hotel’s operations will be even more exciting. The best is yet to come!”

To mark the occasion, the hotel has various promotions in its Food & Beverage outlets. MoMo Café did an exclusive deal of ‘buy two get two’ lunch and dinner buffet which was a huge success.