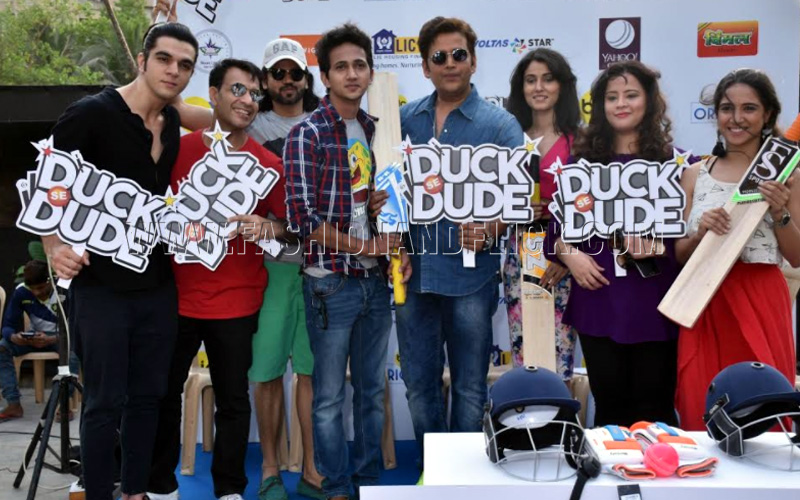 11thApril 2018: BIG FM, India’s one of the largest radio networks, is adding to the high energy quotient of the cricket enthusiasts with the launch of ‘Duck Se Dude’. The slice of life web series with cricket as the backdrop will showcase the story of a young and naïve boy transforming into being mature and confident through his journey of pursuing cricket. Renowned actor Ravi Kishan who has come on board as the narratorlaunched the web series along with the cast at an event held recently. The launch was preceded by an exciting friendly cricket match with the cast and the audience present.

The cast comprises of actors Inaam Ghazi as the lead character Manjeet, Ekta Sharma as the mother, Harsh Singh as the father, Mehek Mehra as the sister, Prithvi Rai as Manjeet’s love interest, and Ashwini Koul as the troublemaker. They introduced themselves and their characters to the audience present and announced 15th April as the launch date of the web series. The director of the web series Rajiv Raj and the cast then moved to the pitch and joined actor Ravi Kishan to play the match.

Speaking during the launch, actor Ravi Kishan said, “When I started my career in Mumbai, people said, ‘Tumse na ho paega’, you are a desi boy. But here I am today, standing amid all of you. I am a self-made man. ‘Duck Se Dude’ is one such story and a nice concept. It is not just a web series by BIG FM, it is a story of many among us. I am also a part of this story as I can relate with it. It is the first ever audio and visual web series built around a good thought. I congratulate the director for doing such a great job.”

Duck Se Dude is the story of an introvert boy (Manjeet) trying really hard to fit in. He doesn’t have any friends and neither has he mustered the courage to speak to the girl he loves. He has grown up observing his non-existence until he decides to seek help from an RJ (radio jockey) who hosts a popular late-night show. The RJ offers Manjeet a simple solution for all his problems – cricket, which transforms him from being a duck to a dude. Duck Se Dude includes interesting and fun characters who depict a certain quirk or trait which adds to the overall appeal of the show.