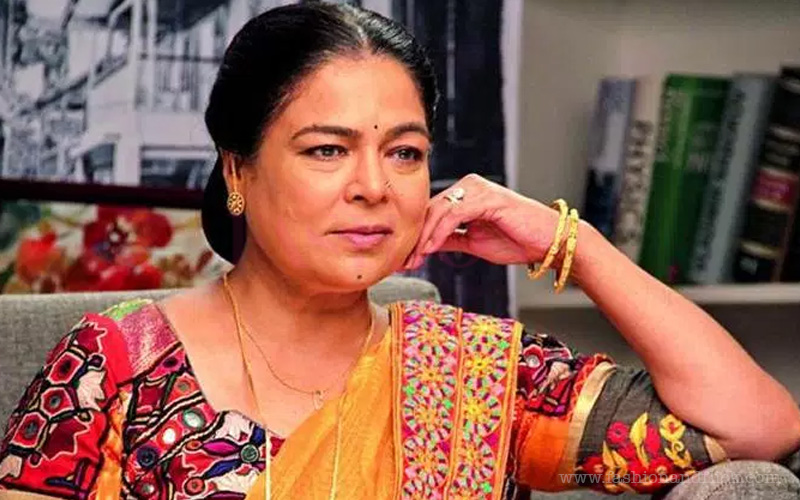 The 59-year-old artiste breathed her last at the Kokilaben Dhirubhai Ambani Hospital (KDAH), in Andheri west, where she was rushed shortly after midnight.

Reema became famous for portraying the “middle-aged, modern, but understanding mother” to some of the biggest stars in the industry on both big and small screens.

On television, she was seen in prominent roles in Khandaan, Shrimaan Shrimati, Tu Tu, Main Main, Do Aur Do Paanch, and the latest ongoing serial Naamkaran.

Here is what the celebrities had to say:

“This is truly sad news…she was warm, gracious and an exceptional actor…I had the privilege of directing her….#RIPReemaLagoo”
— Karan Johar (@karanjohar) May 18, 2017
“Just heard the shocking and unbelievable news about Reema Lagoo’s passing .. such a fine talent and gone so young ! Very SAD !!”
— Amitabh Bachchan (@SrBachchan) May 18, 2017
“Sad to hear about Reema Lagoo. Remember working with her as an associate director in ‘Rangeela’. A talented actress and a warm person. RIP.”
— Madhur Bhandarkar (@imbhandarkar) May 18, 2017
“RIP #ReemaLagoo such a loss to art and cinema. You are and will always be our favourite screen mom. My condolences to the family.”
— PRIYANKA CHOPRA (@priyankachopra) May 18, 2017
“Our very dear Reema Lagoo is no more. Always kind, funny and loving. Saddened.RIP #ReemaLagoo”
— Boman Irani (@bomanirani) May 18, 2017

“It’s shocking to know about the sad demise of Reema Lagooji. Industry has lost a wonderful human being and a great actress. RIP.”
— Ashoke Pandit

“Grew up watching d warmth & love #ReemaLagoo ji brought out on screen. Saddened by her sudden demise.Heartfelt condolences to her family…”
— Anushka Sharma (@AnushkaSharma) May 18, 2017
“I am shocked to hear about Reemaji. RIP Reema Lagoo. One of warmest, nicest people on and off screen. This is very shocking and sad.”
— Kunal Kohli

“Reema Maushi passed away early this morning. A big loss. A personal loss. Known her since I was a child . RIP…Reema Lagoo. Miss you.”
— Shriya Pilgaonkar