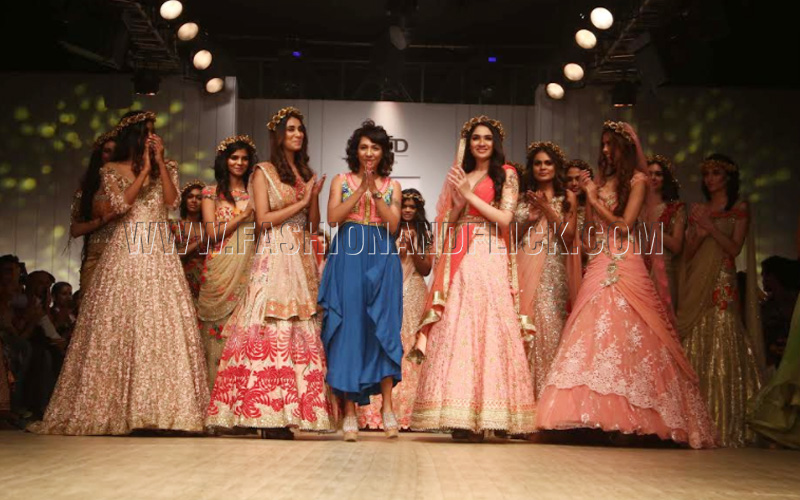 New Delhi, Thursday, October 12, 2017: The Indian Federation for Fashion Development (IFFD) hosted the extremely anticipated ninth season of India Runway Week at The DLF Place Saket, New Delhi. As they are acknowledged to promote new & emerging talent along with renowned names in the industry; the three day of the gala event of India Runway Week highlighted the fashion trends of the upcoming winter festive season where a mix of 39 prominent and imminent designers showcased the wisdom of fashion through their collections. Amid much hue and pomp, audiences witnessed gorgeous models, colorful collections and exotic milieu. With each season the India Runway Week has shown a constant increase in participation by both established and young designers; and appreciation by the media & buyers.

The first day of India Runway Week W/F 2017 was opened by James Ferreira, one of the most prominent names in the Indian Fashion Industry followed by Kaynaat by Aanchal Sawhney, Isabis Couture by Parul M Dhawan. Bollywood Diva Shriya Saran stunned the audience with her gorgeous looks in amazing collection by Kavita Agarwal. The closing show of day 1 of the India Runway Week Winter Festive was presented by Varija Bajaj who showcased “The Flower Child” and Bibi Russell an internationally acclaimed fashion designer from Bangladesh who showcased her love for Khadi and her collection was a tribute to Mahatma Gandhi.

Just like the splendid and successful shows of day 1, day 2 of India Runway Week W/F 2017 was opened by amazingly talented Apash by Aparna and Shruti where Singer Ankit Tiwari mesmerized everyone by his voice while walking the ramp for the designer duo. Followed by Rav by Vashu who presented his Nakshatra collection, Élan by Rahul & Vidhu showcased ‘Samhitha Collection’, Vintage Loom by Ashina Chharia, showcased her latest travel themed collection ‘Wanderlust’. Shibani Dandekar walked the ramp for Twee-In-One by Niti Singhal. The next lined up show was by designer Sehrish Kabir who presented ‘Dilkash’, the show was followed by Nikheil & Rivendra where Ukrainian model Alexandra Kutas, the first fashion model with a disability, who graced the show with her appearance.The La Styliste by Purvi Roy who presented Quirky Formalwear at India Runway Week Winter Festive 2017.Niharika Pandey, Varanasi Weavers and Artisans Society supported by AIACA, SoCHE also presented their collection for the audience. Casio presented Street Style Show by Fashion Bloggers, renowned jewelry designer Akassh K Aggarwal by Shubhashini Ornamentals presented Rangyatra with Geeta Kapoor being the show stealer; the show followed by Rajdeep Ranawat and Kaaisha by Shalini.

As show was headed towards its finale, each show was getting striking and majestic. The third day of India Runway Week W/F 2017 was opened by Nisha Singh with her collection ‘Her Majesty’, followed by JM by Jyoti Munish, Saima Kashif, Getup by Shweta & Moumita; Singer Shibani Kashyap graced the show with her presence and voice for Designer Duo Rajat & Sumit who showcased Indian Modern Boho collection. The next lined up show were Sai Dham’s (NGO) Neo Tribe, Sulakshna Jasra, Sangeeta Swati and AvraChic by Shalini Bisht. Paksh by Sudhir Nayak’s collection speaks of modern vision of a practical, back to basic attitude and Ridhi Dogra walked the ramp for designer Miku Kumar who dedicated the collection to the ‘Royal style diary for the princess in you’. Designer Sadan Pandey presented ‘Illuminate’ and Beauty queen Lopamudra Raut spread her charm at IRW W/F 2017 for Gazal Mishra. Pinessaa by Neha and Shivangi, Indian August, Actress Saiyami Kher sizzled the ramp for Designer Priyal Bhardwaj at India Runway Week 2017. SHREE showcased their four magnificent collections and of course the most awaited grand finale of the India Runway Week was presented by Saaj by Ankita.

Avinash Pathania, Director, Indian Federation for Fashion Development (IFFD), said in a statement “As thought, our efforts are to strengthen India Runway Week as a platform every season. The 9th edition of Winter Festive brought the best of amazing designs to the runway.  We continue to provide an integrated experience of knowledge, rendezvous and business for all our participants, buyers as well as industry experts.” He further stated “India Runway Week is now in its 9th Edition and it is with great pride that we see it grow every year to include more designers and set a grander benchmark for ourselves.”

“Iam extremely delighted with the kind of response we are getting with each passing show. These all are immensely talented designers and the increased number of entries along with the continued growth of the India Runway Week reaffirms the platform’s stature in terms of relevance and reach in the Indian fashion market.” Kiran Kheva, fashion director, IFFD, stated about the event’s growing prominence in the industry. She also added, “Every Season the India Runway Week line-up changes as designers evaluate their marketing strategies and how showing at IRW fits with their business objectives, so it’s great to have some of the better-known designers back. It shows the industry is strong and united and that’s the sense we’re getting this season, a renewed confidence from designers and the industry as a whole.”

India Runway Week kicked off a busy schedule of forward season designer shown running from Friday, October 6,2017 to Sunday, October8, 2017. Fashion lovers had plenty of opportunities to be part of the event.

Skin Control Range For The Rains By Truefitt & Hill