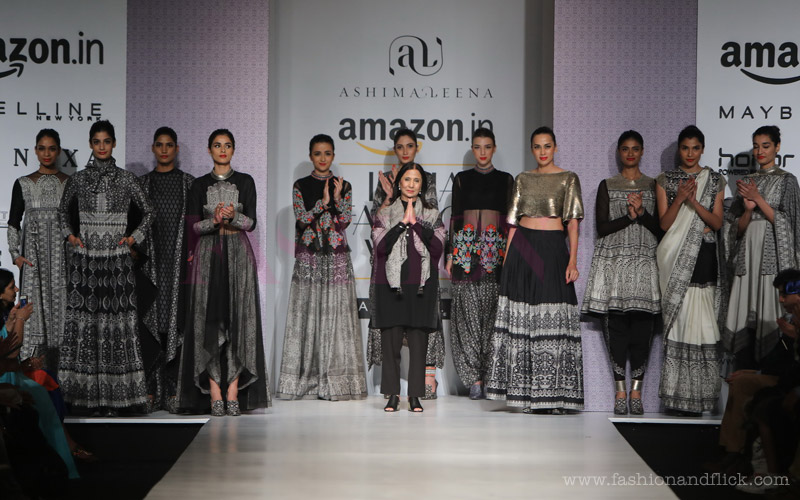 An opulent twist is conjured by interweaving motifs that adorn the architectural realms of Khiva in our Autumn – Winter 2017 collection, exhausting the influence of blue pottery and the vivid radiance of Shiva in his jatadhari edifice that comes to the fore in our visual ode to it – Charukesha. The palette descends rapidly through the iridescence of indigo and into an impermanence of blue, as pansy purples and turquoise are greeted by a contradiction of anthracite and eggshell, and hints of vermillion; like motifs that have withdrawn themselves into the Iznik tiled minarets of an ever traveling caravan of print exaggeration … giving birth to a dimension of modernism that is captured through delicately sculptured skirts, quaint pashmina blouses, tribal gilets, asymmetric kurtas and deftly composed sarees that are juxtaposed with scaled metal details, luxe stone embellishments and appliqués painstakingly crafted to mark an excursion of patterns overlaid with yards of French tulle. The grandiose is muted into a quiet elegance of gravity, rooted in the quintessential AL woman, lending once again, an air of sophistication that embraces the classic with a touch of trend.

The story is taken further into Orientalism, a dynamic and continuing dialogue between the East and West through a design sensibility that remains unabashedly evocative yet unengaging, retaining its dignified distance from the ethnographic divide, warmly conjoining an affection for nuance like a puzzle that sublimates into the subliminal whilst reconciling the past with the present. A resplendency underlines the unification of each look, reminiscent of the kurinishhanas ( reception rooms ) of the forts and citadels that still echo the ‘ gladness of future generations ’ as is historically inscribed on Khorezm palaces, and masterfully depicted through the musical foil to the presentation … rural voices from the East will collide with the overtures of deep notes from the West, building another layer of complexity that amplifies AL’s minuteness of artistic conception and technical prowess. Charukesha is a manifestation of the continuous, an anthology of the monumental and the majestic.