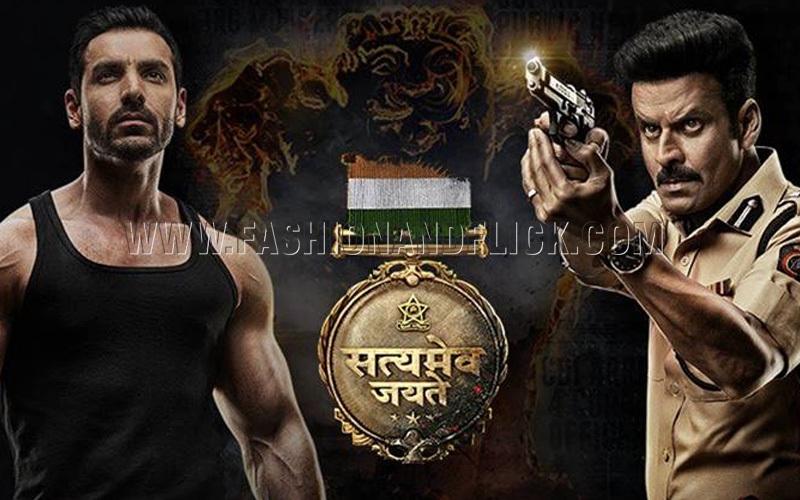 Directed and written by Milap Milan Zaveri, Satyameva Jayate is a films from the ’70s and ’80s, which encorporates hardcore action sequences and enjoyable super dramatic dialogues. This film takes a bold, ruthless take on the corruption. It has a strong message of anti-corruption. The film shows the underbelly of Mumbai Police, uncovering the ugly face of the system which is penetrated deeply with crime and deceit. The film is focused on the Khaki world and its internal working, which soon meets with a jolt.

The film basically comprises Tom and Jerry chase between the cop and criminal, a family tragedy, the quintessential twist before interval, and a token heroine who meet the hero at a cleanliness drive on Juhu beach, where she shames a local politician for holding the flag upside down. The purpose of the heroine is mystifying until the very end.

Veer (John Abraham) takes on the task of cleaning up the widespread corruption in Mumbai police. And he does it with swag. There’s a vigilante with badla on his mind. All he needs is a hoodie, his brawny physique, a matchbox and a filmmaker with a penchant for slo-mo and dialoguebaazi to eliminate the messy lot.

Shivansh (Manoj Bajpayee) as a loyal police officer unknown about the killer’s identity takes the charge of finding the serial killer who later turns out to be his brother.

Tanish Bhagchi’s Dilbar in the film comes in as a visual treat, Nora Fatehi just soars the temperature with her super-hot presence.

Satyameva Jayate raises many questions about India’s judiciary system, but the depiction of it takes a popular route. The makers have tried their best to put the audience in a situation where they struggle with issues of morality and integrity.

John’s performance is fine. His biceps, muscles as usual treat for some and inspiration to others. Manoj Bajpayee has done quite a nice job, but it’s definitely not his best. The newcomer Aisha Sharma looks promising. Ganesh Yadav as Damle & Rajesh Khera as Bhonsle leave the maximum impact as baddies.

At nearly 150-minute duration, the script written by Milap Milan Zaveri has its heart at the right place. It has every kind of masala in it. It’s made for a certain section of audience and they’ll enjoy this to the core.